skyticket >
TRAVEL GUIDE TOP >
Genre >
Sightseeing >
Yangon: Things to Do in the Jewel of Myanmar 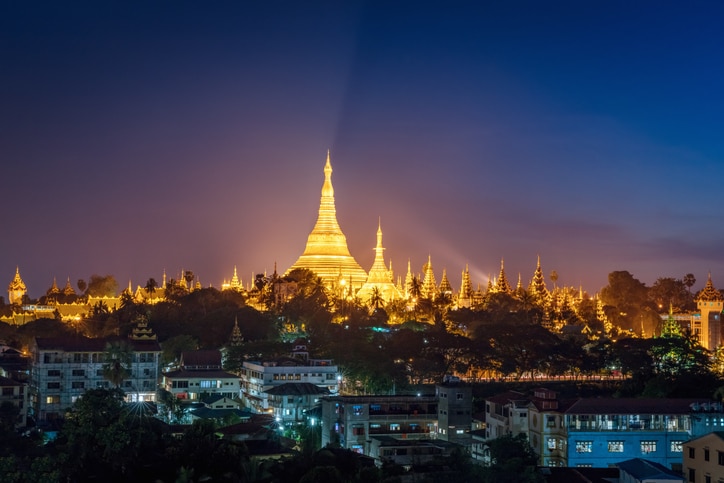 Yangon (also known by its colonial name of Rangoon) is a vibrant city in Myanmar, the former British colony of Burma. As the largest city in the country it served as the capital of the republic until 2006 when a new government relocated the capital to Naypyidaw. It is still, however, the country’s main commercial and artistic hub that's home to a rich historical past stretching back as far as the early 11th century when it is believed to have been founded as a fishing village. The city is widely known for its numerous aging and colorful colonial-era buildings. Since the country reopened to the world after years of oppressive rule, the city has gone through a boom in tourism making it one of the newest and most exciting destinations in Asia. 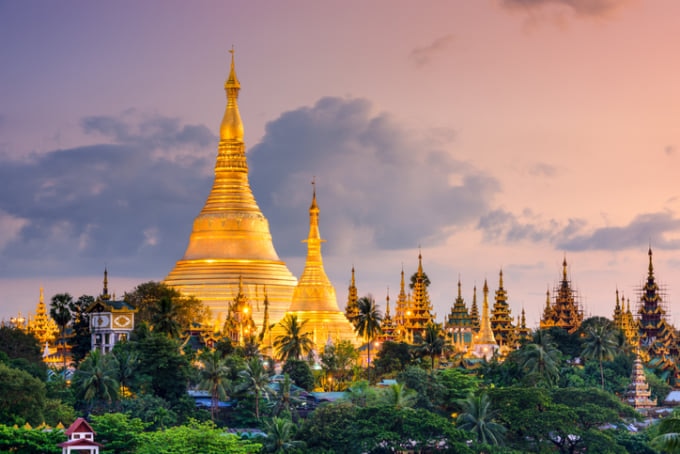 The Shwedagon Pagoda sits atop a hill in the heart of the city of Yangon, Myanmar. As one of Buddhism’s most sacred sites, it's among the best-known pagodas in the world and can't be missed on a trip to the city. It's estimated to have been initially built around 2,600 years ago and features a beautiful 325-feet gold-plated stupa on the main building with several other stupas rising up around it.

Known locally as Shwedagon Zedi Daw, it's a major landmark in Yangon and can be seen from most points in the city both by day and at night when its golden roof illuminates the city sky. It's believed to house strands of Gautama Buddha’s hair as well as other religious relics making it a place of pilgrimage among Buddhism adherents. 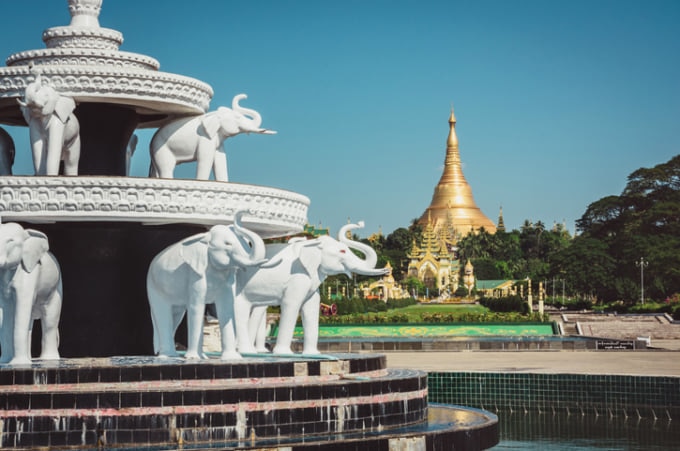 Located near the western staircases of the Shwedagon Pagoda, People’s Park is a well-tended public park that was opened in 1990. Its strategic location at the heart of the city makes it a popular recreation and relaxation place among locals and tourists with plenty of attractions and activities to keep you engaged while there. It was renovated by a private company in 2011 and it is now even more beautiful with huge green spaces, colorful flowers, ponds, fountains, treetop observation platforms, planetarium and an amusement park.

There is also a fighter jet and a decommissioned Myanmar Airways Fokker which you can climb inside which gives a great insight into the feeling of air travel several decades ago. The park is a must-visit not just to chill out and relax but to enjoy the beautiful views of Shwedagon Pagoda.

Just north of downtown Yangon near Kandawgyi Lake is Yangon Zoological Gardens, a 70-acre recreational park that includes a zoo, an aquarium, an amusement park and a museum. The zoo is renowned for its large and diverse collection of flora and fauna which have been collected since its establishment in 1906. The animals include over 20 reptile species, 70 bird species, and over 60 species of mammals including both native and exotic animals.

More than just your average zoo however, Yangon Zoo contains a museum of natural history, which hosts a large taxidermy collection of of rare animals that is highly worth checking out. 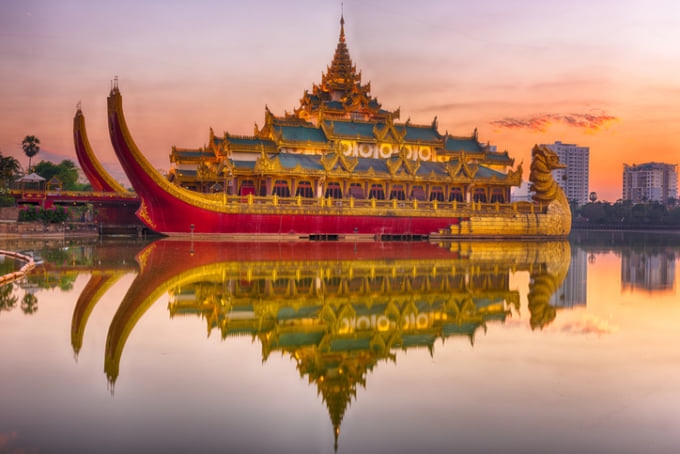 Kandawgyi Lake is a man-made lake built by the British colonial government to supply the city with clean water. The main attraction is Karaweik Palace, a replica of a royal barge which is located close to a small park on the east side of the lake. You'll also find plenty of eateries and bars along the lakeshore where you can dine and drink as you enjoy the magnificent views of the lake especially at night when the reflection of the shining Shwedagon Pagoda dances on its surface. 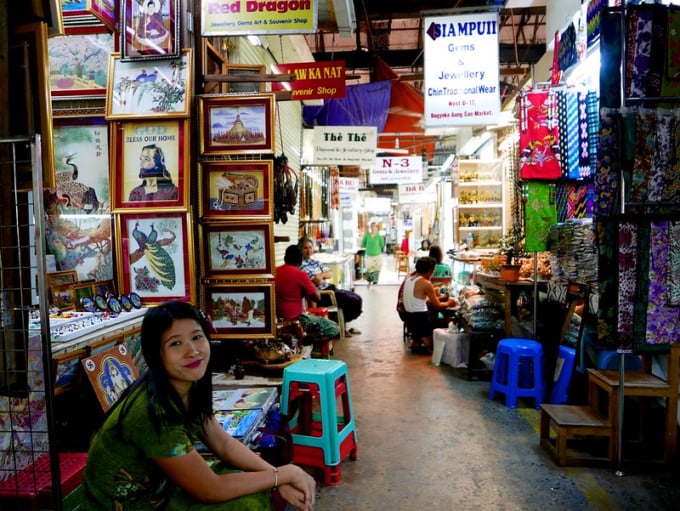 Bogyoke Aung San Market is a large market located within the Pabedan area in Yangon, Myanmar. Formerly known as Scott’s Market, it is a treasured landmark in the city and is widely known for its unique and quaint cobblestone streets. As a result, it is a major tourist destination attracting scores of visitors who come to shop and explore the vast market.

The ground floor and the first floor are dominated by antiques and jewelry shops selling items made from the world-famous Burmese Jade, rubies and other precious stones. The rest of the market has a host of clothing stores, handicraft shops, art galleries and restaurants. A newer wing located just across from the market also houses shops selling foodstuffs, clothes, medicine and foreign goods.

Inya Lake is located approximately ten kilometers from the city center and is a popular tourist attraction with a host of activities for visitors to engage in. It was created by the British colonial government in 1883 to serve the city with clean water and is considerably larger than Kandawgyi Lake located further south. It offers opportunities for a variety of water sports including sailing, rowing and swimming. There are several paths along its shores where you can jog or stroll while enjoying the stunning views of the lake and its surroundings. It's extremely beautiful making its perimeter the most exclusive area of the city with mansions, hotels and classy apartments. 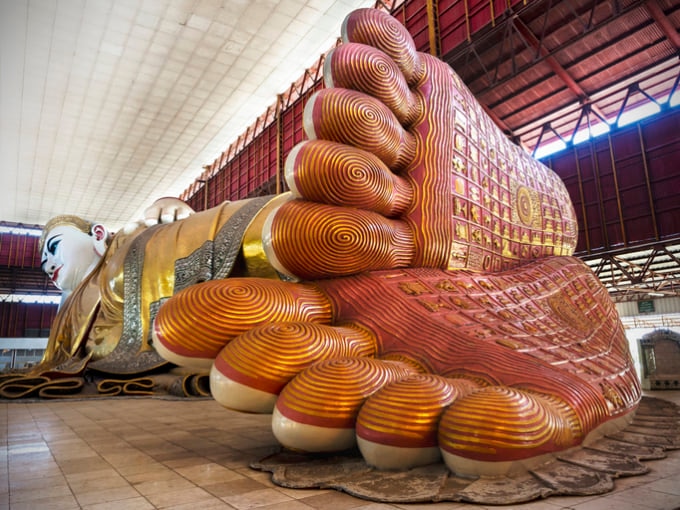 Chaukhtatgyi Buddha Temple is arguably the best-known Buddhist temple in Yangon. This is because it is home to the most iconic Reclining Buddha in the country. The huge statue is housed in a large shed just north of Kandawgyi Lake and is one of the longest Buddha statues in the country with a length of 66 meters. The image was commissioned by a wealthy Burmese in 1899 and completed in 1907, but the image had a few flaws and it was therefore demolished in the 1950s before it was rebuilt once more. 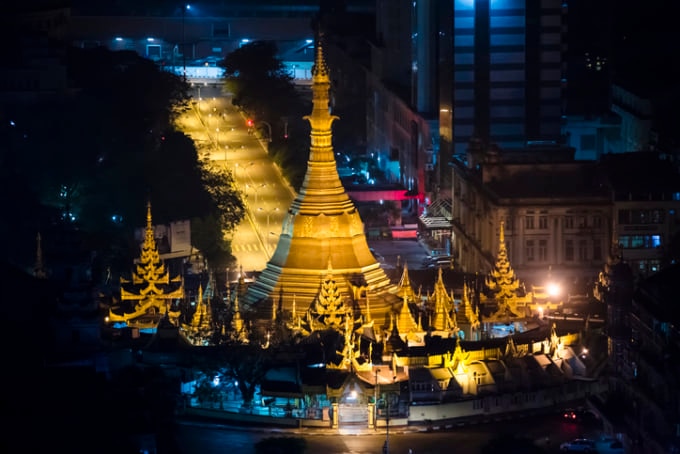 The Sule Pagoda is located at the center of downtown Yangon, at the junction of Sule Pagoda Road and Mahabandoola Road. It is a treasured historical landmark in the city and is believed to have been built over 2,600 years ago during the time the Buddha was alive although it has been rebuilt several times since then. Its 48-meter high octagonal-shaped dome has been an object of fascination for architecture enthusiasts for decades and is topped by a beautiful multi-tiered ornamental element. The pagoda has been a major influence in the politics of Myanmar as it has always been a popular meeting place for activists due to its central location. 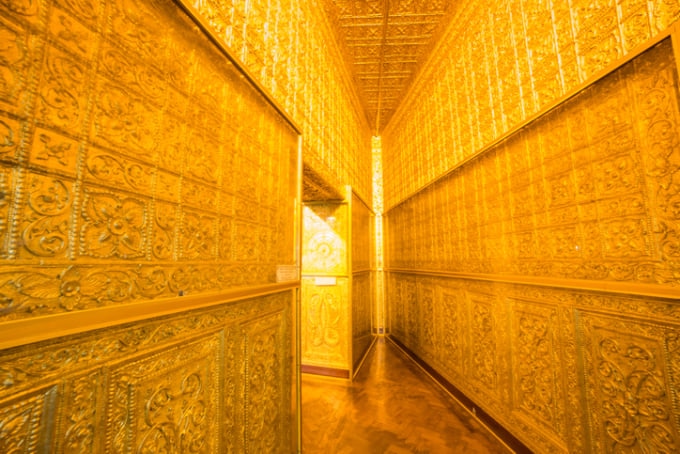 The Botataung Pagoda is among one of the most revered Buddhist temples in Yangon, located on Strand Road in Botataung Township. It was initially built over 2,500 years ago by the Mon people but was rebuilt in 1948 due to substantive damages sustained in a bombing campaign during the Second World War. Its main attraction is the 40-meter main stupa which unlike many stupas, is hollow and open to the public. It enshrines sacred Buddhist relics and other ancient artifacts and images discovered during its reconstruction. The Nat Pavilion located at the end of the stunning bridge houses a life-like image of Bo Bo Gyi who is believed to be the spirit guardian of the pagoda.

The National Museum of Myanmar located in the Dagon Township of Yangon city is a must visit as it is one of the treasured custodians of Burmese history, art, and culture in Myanmar. It was founded in 1952 at the now demolished Jubilee Hall building before being moved to a larger location on Pansodan Street in 1970. It moved to its current location in September 1996 after a lengthy six-year construction period. The museum’s exhibits are housed in three five-story cubic buildings located along Pyay Road. Near the entrance are iconic bronze statues of three legendary kings, however, the main attraction is the Lion Throne, the throne of Burma’s last king. The museum’s vast collection and strategic location near to other attractions make it the perfect place to learn about the country’s history before venturing out to explore the city further.

Myanmar and in particular, Yangon is among the latest additions to the global travel scene due to decades of political strife that closed it off to the rest of the world. More and more people are being drawn by its appeal and all one hears is praise. It is a stunning city with breath-taking scenery, ancient temples, bustling markets, and a host of other attractions keeping you engaged from the moment you land up until your departure. 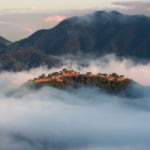 As the prefecture lying next to Osaka and Kyoto, Hyogo is usually missed out in favor of spending more time in the Kansai region's tourism m... 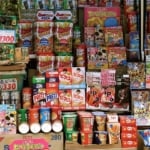 As one of the most coveted destinations in the world, a trip to Japan is an overload for all the senses, but particularly your taste buds. L... 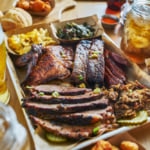 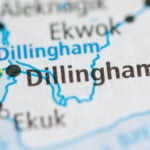 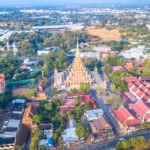 When you are sightseeing in amazing Thailand, you should consider visiting Khon Kaen, one of the four cities of the Isan region in the count...